Global Warming and Body WARMING MAY BOTH Be Caused By Environmental, Dietary, Respiratory and Metabolic Acids!
The following picture shows the acidification of blood which causes degeneration of the red and white blood cells, internal blood clotting and chaining of the red blood cells. This condition of the blood leads to light headedness, cold hands, cold feet, forgetfulness, muddle thinking or brain fog, stroke, heart attack, tumor formation and internal bleeding, just to name a few.
I have been studying the acid/alkaline conditions of the blood for over thirty years and have determined that all sickness and dis-ease or body warming is caused by the over-acidification of the blood and tissues. 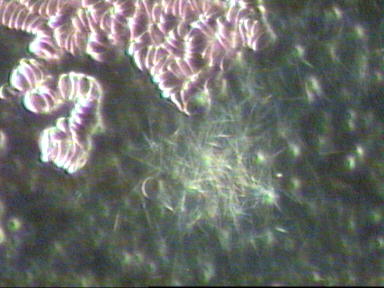 Scientists have been studying the acid/alkaline conditions at the bottom of the Mediterranean Sea. Natural
carbon dioxide vents on the sea floor are showing scientists how carbon emissions will affect marine life.
Dissolved CO2 makes water more acidic, and around the vents, researchers saw a fall in species numbers, and snails with their shells disintegrating because of the increase of acid C02.
Writing in the journal Nature, the UK scientists suggest these impacts are likely to be seen across the world as CO2 levels rise in the atmosphere.
Some of the extra CO2 emitted enters the oceans, acidifying waters globally.
The only way of reducing the impact of ocean acidification is the urgent reduction in CO2 emissions.

The following article appeared in the Toledo Free Press by Diana Patton on how we create “global warming” or “Acid Rain” from within the body.

We’ve all heard of global warming. Its premise is that the build-up of trash and waste we generate produces toxic gas that is causing the Earth’s atmosphere to deteriorate — which is literally heating up the Earth. What you may not know is that something quite similar happens when trash and waste build up in your body. Toxic acidic fluid forms, causing your body to deteriorate — leaving the body chronically sick, tired and diseased. I’ve coined a new term to describe the phenomenon: “body warming.”

Dr. Robert O. Young, microbiologist, scientist, nutritionist and author of “The pH Miracle” and “The pH Miracle for Weight Loss,” has studied the human body at the cellular level for more than 25 years. The premise of Young’s work is the human body must remain in balance in order to thrive. The balance he’s referring to is your pH balance; pH means “potential for hydrogen.” Your body is 70 percent water. Young says, to be in optimal pH balance, the fluid within your body (your blood) should test at 7.365, to maintain a healthy alkaline/acid balance. Think of pH imbalance as your own personal form of acid rain. But instead of damaging Earth’s soil and lakes and, eventually, the fish, trees and plants that thrive in them, pH imbalance damages your internal “environment.” That’s why I call it “body warming.”

If you are too acidic over time, your immune system becomes severely sluggish. Your endocrine system gets out of whack. Your vital organs begin to shut down, and your bones become brittle. If this acidic state continues, the result is chronic disease, even death. How do we get to a state of body warming? – Too much stress and negative thinking. If you are very stressed and “feed” yourself a steady diet of negative thoughts, you will eventually produce massive quantities of acidic trash and waste in your body. In turn, they produce the toxic “liquid” called acid.

Dr. Young says negative emotions are capable of creating two to three times more tissue acidity than foods or liquids we consume. Tissue acidity results in sickness and disease or dis-ease. – A reversed way of living and eating.

Dr. Young suggests we are polluting our bodies with too many acid-producing activities, among them smoking and drinking too much alcohol. We also produce acid because of our excessive intake of acid-producing foods, such as dairy products, sugar, animal protein, processed grains and junk food.

And, finally, Dr. Young says we lack activity and exercise. Over time, all these factors add up to produce the toxic liquid called acidity, causing “body warming.” But not all is lost. Just as proponents of “global warming” “go green,” we can “go green” to counter body warming.

1.Change the way you think. List a half-dozen past experiences that brought you happiness, joy and/or excitement. When negative thoughts arise, think of those past experiences. In addition, incorporate more prayer and/or meditation into your life.

2. Try a simple detoxification plan and increase activity. By detoxification, I mean temporarily remove certain foods that cause acid build-up, and sweat enough to release your body’s toxins. For example, replace pasta or bread with extra broccoli portions for 10 days. Increase your activity by devoting 30 minutes a day to build up a sweat; try 10 minute intervals of a brisk walk, jog, a moderate walk or whole body vibrational exercising. http://www.phmiracleliving.com/vibratrim.htm

4. Water rules: Drink your body weight in ounces (e.g. 130 pounds of weight is 130 ounces of water). If that’s too daunting, start with half your body weight in ounces and work your way up. And make sure the water that you are drinking is alkaline. http://www.phmiracleliving.com/melody.htm http://www.phmiracleliving.com/water.htm

Test your pH every single morning. Purchase pH strips at: http://www.phmiracleliving.com When you first wake up in the morning, pull off a strip and test your first morning urine only. The urine color should be no lower than 6.8 but ideally above 7.2. To help increase your urine pH and in turn your tissue pH may I suggest the mineral salts.